Behind the Picture: Sol Justitiae by Albrecht Dürer 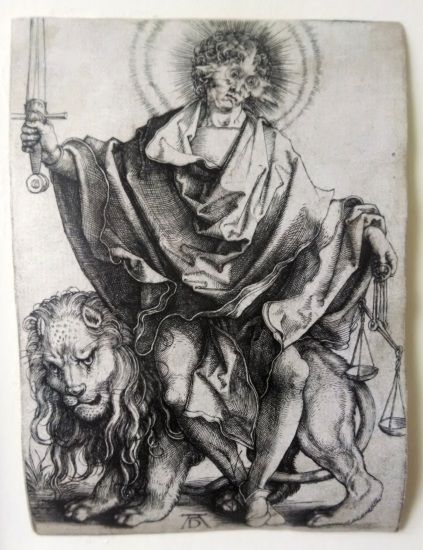 Nearly every era, including our own, has its share of apocalypse theories and end-of-days false alarms. But amidst the death and disease of the Middle Ages and early Renaissance, it’s easy to imagine how tangible worldwide mortality must have felt to the general public. As a result, Judgement Day is a prominent motif in art of the period. This engraving by Albrecht Dürer, acquired by Josef Glimer Gallery from a private collection in Austria, marks one of the artist’s many explorations of the world’s end. It was created in 1499, the year all Jews— a perpetually-massacred scapegoat for the Black Plague— were expelled from Dürer’s hometown of Nuremberg. It was also the year the Emperor’s army was defeated in the Swiss War and the year that astrologers, perhaps responding to all the tumult, convinced many to move to high ground with predictions of an apocalyptic deluge.

Despite its small size, leading Dürer scholar Erwin Panofsky deemed Sol Justitiae one of the artist’s most impressive creations. The engraving is inspired by this caption from Petrus Berchoius’ Repertorium Morale, a Biblical-moral reflective text intended for preachers, given to Dürer by his godfather:

“The Sun and Righteousness shall appear ablaze when he will judge mankind on the day of doom, and he shall be burning and grim. For, as the sun burns herbs and flowers in the summertime when he is the Lion, so shall Christ appear as a fierce and lion-like man in the heat of Judgement and shall wither the sinners.”

Dürer’s engraving creatively combines pagan, astrological and Biblical symbols. The central figure sitting on a lion is at once Christ, the Roman goddess of justice Justitia, and the ancient sun god, called Helios by the Greeks and Sol by the Romans. He holds Justitia’s scales and a double edged sword, but unlike the traditionally blindfolded goddess, his eyes— wide and confrontational— see all. His legs are crossed, the customary sitting position for judges in ancient law books and a stance adopted in many other Renaissance depictions of leaders. His mask is composed of three prongs of flame. While this number suggests the Christian Trinity, its beaming rays are a strong gesture toward Sol.

The duality of the Christ figure in this piece may also be influenced by ancient Roman coins, which sometimes featured overlapping profiles of emperors and gods to convey the idea that the emperor could become geminatapersona—”human by nature and divine by grace.”

The lion not only suggests biblical excepts comparing Christ to a lion but also Leo, the sign of the zodiac for July, when the sun is at its most intense. Berchorius suggests that the justice of Christ on Judgment Day will be as powerful as the July sun.

You are currently reading Behind the Picture: Sol Justitiae by Albrecht Dürer at Josef Glimer Gallery.