I find it necessary to inform you that due to major changes in the neighborhood, as well as with the gallery’s building, I decided to move to a new location in the near future. I will let you know as soon as everything is finalized, the process may take a few months. In the meantime, I will be available through email only for any of questions, requests, or comments.

I hope you understand my position and I look forward to continue our special relationship. Thank you for your support in the past, present, and looking forward towards working together in the future.

Please note that as of April 29th, 2016 the gallery will be closed and there will be no phone connection.

As artists and craftspeople grow more ambitious, their satisfaction with traditional processes can wane and desires to push further away from creative boundaries begin to manifest.

In the late 1970s, Mexican master artist Rufino Tomayo was asked by Luis Remba, a commercial printmaker in Mexico City, to contribute original art. Tomayo agreed, but refused to work within the bounds of traditional two-dimensional printing–he demanded more texture and dimension. Remba, originally a mechanical engineer, set about to create a machine that would allow Tomayo to print in a way that would accommodate. The end process is now termed a “Mixograf”–a mixture of graphic processes.

A Mixograf is a unique printing process in that the artist works on a beeswax plate. Cutting, drawing, and carving out the wax into a mold. The image from which would not be reversed, as with etching or lithography. To accommodate the high relief and textural nuances of the mold, a special hand-made 100% cotton paper slab is used for printing the final product. The thick paper also allows for the absorption of pigment, giving it a soft watercolor saturation.

Romulo plays with this new technique, joining Tomayo and other major Latin American artists, at the Mixografic Workshop (1979-1986). Figures, inspired by ancient Toltec and Zapotec tribal art, are etched into the surface and hand-painted.

The detail below shows the depth the artist is able to achieve with the thick cotton paper.

Here, Romulo demonstrates the smaller details of the etching.

A personal note about Ellen

I remember meeting Ellen DeLoach the first day I started working at the Josef Glimer Gallery in July of this year. She and her husband had driven all the way from Atlanta, GA with a car full of paintings, drawings, and encaustics. We brought every piece up to the gallery, unwrapped them and discussed each one at length. Through the process, we all became more intrigued by her approach to art as a therapeutic expression of her difficult emotions.

However, the tumultuous paintings contrasted with her bright, energetically warm personality. She shared each piece enthusiastically and we were equally excited to be exhibiting her work. Her paintings attracted praise and meditative contemplation from collectors, students, and artists fascinated by her technique and colors only found in her native Georgia.

We loved working with her and being able to give volume to her voice. We are deeply saddened by the loss of a beautiful, vibrant soul who had so much more art to share with the world. Our condolences and thoughts go out to her family, friends, and everyone she touched with her charm and big heart.

A Bold Return to Form for Chicago Artist Lee Tracy

When I was a young adult I longed to be free like a tumbleweed. The tiny shrub doesn’t grow upright, it grows crooked as it follows the sun. With age that tumbleweed becomes unhitched from earth. It begins to wander by rolling and hovering above the land on currents of air. Wind creates a course filled with both speed and stillness.

In her projects, Lee Tracy embraces the energy of the terrestrial—using her hands to dig into the red clay of the New Mexico desert, ’cleansing’ symbolic shrouds in crystal lake waters in Maine, or spending days collaborating with the Onon River in Mongolia.  But these large installations are only part of her prolific media-spanning, socially-driven work over the past decade. 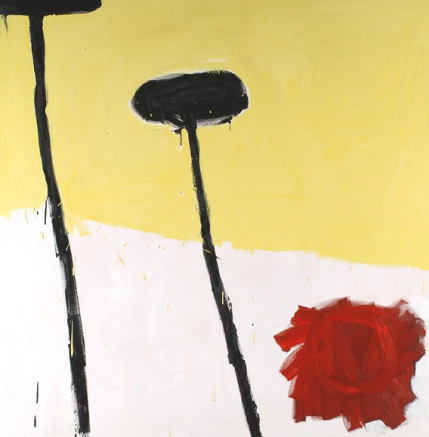 As an artist, she leaves no medium untouched– she explores painting, writing, drawing, installation and sculpture. In her oil paintings she plays with the vital lyricism of color, form, & texture creating large pieces with tremendous presence. Often playing off nature, the environment, philosophical ideas, and deep personal experiences, her works feel at once emotionally vivid and alive; projecting her voice through magnificent hues and an expressive brush. 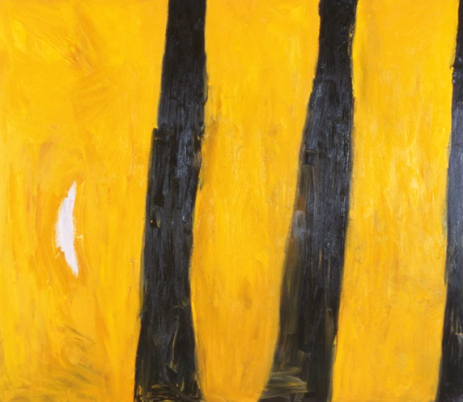 The upcoming exhibition hosted by the Josef Glimer Gallery and The Arts Palette, Memories from the Future, will feature Lee Tracy‘s paintings accompanied by a theatrical reading of the artist’s diary by Sheila Willis and music by cellist Lilianna Wosko.

Hope to see you there! 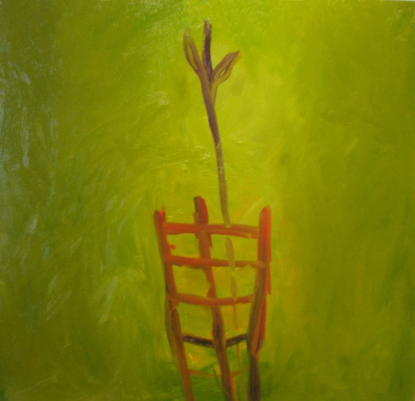 To learn more about Lee Tracy, please visit http://www.leetracy.com or to inquire about the artist’s work at Josef Glimer Gallery, call 773-787-4640 or email info@josefglimergallery.com. 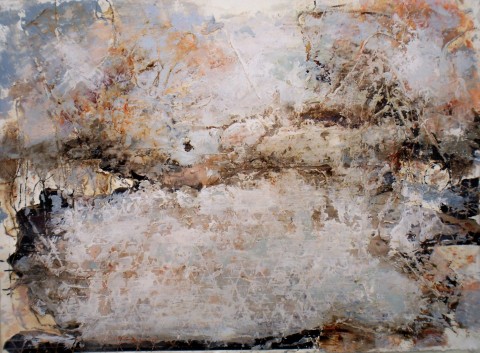 The American South is a land of strained history and ever-healing wounds. Artist Ellen DeLoach, a Georgia native, seeks to extract the spiritual essence of place, unearthing soil rich in both turmoil and triumph.

Mixed media works like Kennesaw Mountain Battlefield feel at once violent and graceful. In her Nesting series, DeLoach has removed the idea of a horizon line altogether, leaving raw, emotive color and texture. Though she works in a variety of materials including oil, fiber, collage and encaustic, her process is most deeply rooted in drawing. Energetic contour lines, both 2-D and 3-D, wind in and out of the artist’s thickly-layered compositions. 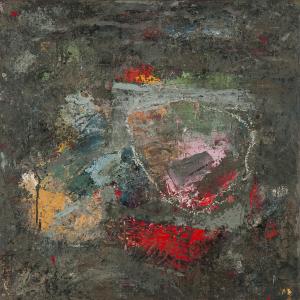 DeLoach’s figurative pieces complement rather than contradict her landscapes, turning ideas of destruction, scarring, and forgiveness inward to the female form. Layers of melted, carved wax suggest both plowed soil and torn flesh. Loosely inspired by the Biblical story of Ruth, DeLoach’s women exude both physical and spiritual resilience.

For the last five years, DeLoach has flourished under the tutelage of Abstract Expressionist painter and Guggenheim fellow Michael David. David writes of the “fierce beauty” of DeLoach’s work, “…she creates a history, a record of loss, triumph and redemption.”

Behind the Picture: Grandmother with Child by Francisco Zúñiga

This crayon, charcoal and pastel drawing by Francisco Zúñiga was acquired by Josef Glimer Gallery from a private collection several years ago. While Zúñiga may be best known for his more stylized stone sculptures, Grandmother with Child is one of many similarly classical drawings that he produced during his lifetime.

Zúñiga was born in Guadalupe, Barrio de San José, Costa Rica on December 27, 1912. He was interested in Renaissance art and anatomy from an early age, and by fifteen, he was working as an assistant in his father’s studio of religious sculpture. He enrolled briefly in the Escuela de Bellas Artes in Mexico before pursuing art on his own, drawing inspiration from both pre-Hispanic tradition and more modern movements like German Expressionism. His work began gaining recognition by the 1930s, and in 1935, his sculpture La Maternidad won first place in the Latin American sculpture competition the Salón de Escultura en Costa Rica.

The artist traveled to Mexico City where was mentored by painter Manuel Rodriguez Lozano. He went on to become a key faculty member of La Esmeralda, the National School of Painting and Sculpture in Mexico City, where he taught for the next three decades.

Zúñiga’s forms reflect both the iconic reverence of religious sculptures and the monumental style of pre-Hispanic art. He was strongly drawn to the human figure, and many of his sculptures and drawings depict Mexico’s indigenous peoples. He associated indigenous women with the infinite cycle of nature, and held the role of mother as particularly sacred. He explained in a 1987 admittance speech to the Academy of Arts of Mexico,

Over the course of his career, Zúñiga traveled to San Francisco, New York City, Spain, Austria, and France, and created over thirty-five public sculptures including several hero monuments in Mexico and a group of sculptures called Tres generaciones in Sendai, Japan. His works are found in numerous permanent collections including the Metropolitan Museum of Art, Museo de Arte Moderno in Mexico City, the Phoenix Art Museum, the Hirshhorn Museum and Sculpture Garden in Washington D.C., and the San Antonio Museum of Art.

Press for The Chicago Angels Project

“…I like that ‘The Chicago Angels Project’ is straight-forward enough to be an uncluttered memorial.” —Christopher Borrelli, Chicago Tribune

“You can feel their spirits lifting off the wall.” —Exhibition co-organizer Laurie Glenn, in an interview with WDCB Public Radio

“There’s something compelling about seeing the violence done to young people through the eyes of their peers.” —Sue Ontiveros, Chicago Sun-Times 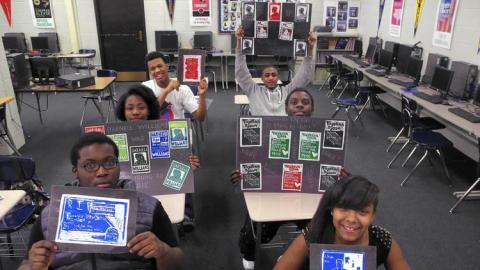